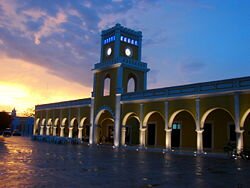 Campeche (Ahk'iin Pech in Modern Maya)[citation needed] is the capital city of the Mexican state of Campeche. The city's population at the 2005 census was 211,671 people. The municipality for which it serves as municipal seat had a population of 238,850.

The city was founded in 1540 by Spanish conquistadores as San Francisco de Campeche atop the pre-existing Maya city of Canpech or Kimpech. The Pre-Columbian city was described as having 3,000 houses and various monuments, of which little trace remains.

The city retains many of the old colonial Spanish city walls and fortifications which protected the city (not always successfully) from pirates and buccaneers. The state of preservation and quality of its architecture earned it the status of a UNESCO World Heritage Site in 1999. Originally, the Spaniards lived inside the walled city, while the natives lived in the surrounding barrios of San Francisco, Guadalupe and San Roman. These barrios still retain their original churches;