Toluca, formally: Toluca de Lerdo is the state capital of Mexico State as well as the seat of the Municipality of Toluca. It is the center of a rapidly growing urban area, now the fifth largest in Mexico. It is located 63 kilometers (39 mi) west-southwest of Mexico City and only about 45 minutes by car to the western edge of the Distrito Federal. According to the 2005 census, the city of Toluca has a population of 467,713, with 747,512 as the total municipal population. The city is the eighth largest in the State of Mexico in population, whereas the municipality is the fourth largest. The municipality of Toluca, along with twelve other municipalities make up the metropolitan population of 1,610,786 as of 2005, making it the fifth most populous metropolitan area in Mexico and the largest entirely within the State of Mexico. When Toluca was founded by the Matlazincas, its original name was Nepintahihui (land of corn)(tierra del maiz). The current name is based on the Nahuatl name for the area when it was renamed by the Aztecs in 1473. The name has its origin in the word tollocan that comes from the name of the god Tolo + can (place) to mean "place of Tolo". It is also referred to in a number of Aztec codices as Tolutepetl, meaning hill of the god Tolo, referring to the nearby volcano. The name Toluca de Lerdo was adopted in 1861 in honor of President Sebastian Lerdo de Tejada.

The center of the town is the Zocalo, also known as Plaza de los Martires (Plaza of the Martyrs), which includes buildings such as the Palace of the State Government and the Justice Palace (Palacio de Justicia). The square is named after events that took place after the Battle of Tenango Hill during the Mexican War of Independence. Insurgent commander Jose Maria Oviedo was faced with the royalist army of Rosendo Porlier, who succeeded in driving the rebels northward to Toluca. Viceroy Venegas ordered reinforcments for Porlier's army and dispersed the insurgents, causing them to lose artillery and supplies. In addition, the royalist forces took over a hundred prisoners and executed them in the main square. The bodies of the prisoners were buried in a mass grave behind what is now the Municipal Palace. A temple was built over the spot after the end of the Revolution. A monument to Father Miguel Hidalgo, the "father" of the Mexican Revolution is in the center of the square. It was created in Florence by Rivalta in 1899. The pedestal has reliefs depicting the storming of the Alhondiga de Granaditas and the Battle of Monte de las Cruces. 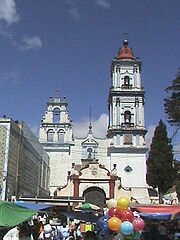 The central plaza is surrounded by state and municipal government buildings. The state government palace and the Chamber of Deputies are recent constructions, but the buildings housing the state court and the municipal palace date from the 19th century. The state court building originally was the home of the state government and was designed by Ramon Rodriguez Arangoiti, who also designed the imperial wing of the Chapultepec Castle. The municipal palace was completed in 1873 on land that once belonged to a Franciscan monastery. The Chamber of Deputies building contains murals done by Leopoldo Flores, which together are known as Construction: Images and Flight depicting man constructing buildings and himself at the same time. The municipal palace and the Chamber of Deputies are decorated with Neoclassic facades, but the other government buildings, built in the 1960s are faced with tezontle in the style of the 18th century palaces in Mexico City.