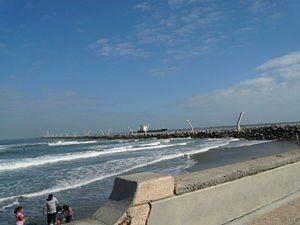 Coatzacoalcos is a major port city in the southern part of the Mexican state of Veracruz, on the Coatzacoalcos River. Coatzacoalcos comes from an indigenous word meaning "Site of the Snake" or "Where the snake hides". The city serves as the municipal seat of the municipality of the same name.

This location has prompted plans for an interoceanic waterway across the Isthmus of Tehuantepec, or for a much expanded railroad system, for over a century.

Excavations in 2008 for a tunnel bridging the Coatzacoalcos River indicate a substantial pre-hispanic population. By the time of the Spanish arrival the area was under Mayan influence. In 1522, Hernan Cortes ordered Gonzalo de Sandoval to fund a settlement near Guazacualco. Sandoval named it Villa del Espiritu Santo. It was elevated to the category of port in 1825 and the name changed to Coatzacoalcos.

Coatzacoalcos became a very important crossroads during the oil boom of the 1970s, connecting the Yucatan Peninsula and oil fields in Campeche to the rest of Mexico and to the port of Salina Cruz in Oaxaca on the Pacific coast.

The city's industry is dominated by the petrochemical sector. Four big industrial petrochemical complexes are located near the city (Pajaritos, Cosoleacaque, Morelos and Cangrejera) making it one of the most important concentrations of its kind in the world. The state-owned Pemex Petroquimica is headquartered in Coatzacoalcos and 85% of its production is concentrated there.

Coatzacoalcos is the birthplace of actress Salma Hayek and journalist Maria Antonieta Collins.