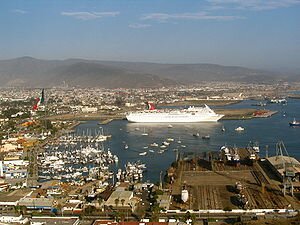 Ensenada (its full name is: Ensenada De Todos Santos) is the third-largest city in the Mexican state of Baja California. It is located 116 km (about 70 miles) south of Tijuana. Ensenada is also the municipal seat of Ensenada Municipality, one of the five into which the state is divided. Ensenada is locally referred as La Bella Cenicienta del Pacifico (The Cinderella of the Pacific). Located in the Bahia de Todos Santos - an inlet of the Pacific Ocean - Ensenada is an important commercial and fishing port as well as a cruise ship stop. There is also a navy base, an army base and a military airfield, which functions as an airport of entry into Mexico. The city is backed by small mountain ranges. Due to its location on the Pacific Ocean and Mediterranean latitude, the weather tends to be mild year-round. Although the winter rain season is short and the area is prone to prolonged droughts, Ensenada sits in the heart of a wine country that is widely regarded as the best in Mexico. It is said that the first vitis vinifera made it to the peninsula (specifically to the San Ignacio Mission) in 1703, when Jesuit Padre Juan de Ugarte planted the first vineyards there. 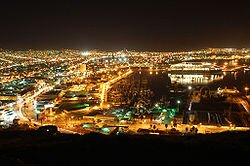 Ensenada is conveniently located some 120 kilometers south of the border with the United States, connected via a four lane toll road MX-1D and a two lane free road, which makes it a natural destination for tourists on short vacations by car. Ensenada's proximity to California also makes it a destination for short cruise ship trips from the Los Angeles area. There are four ships that make weekly trips to Ensenada as of 2005. One of these ships, The Monarch of the Seas, operated by Royal Carribean Cruise Lines will cease operations in the Pacific in mid October 2008. A few minutes south of town on highway 1 is the second-largest of three known major marine geysers in the world. This one is known as "La Bufadora" ("The Blowhole"). Ensenada area has several celebrated surfing spots, such as San Miguel Beach, California Trailer Park, Stacks and 3 M's (Tres Emes in Spanish), which are located in the north coast of the city. Todos Santos Island (better known as 'Todos') is a small island located west of Ensenada (about 2 hours by boat), and a world famous surfing spot. The Billabong XXL surfing contest has been held at Todos Santos Island several times. Wave faces can reach above 60 feet on the island. Brad Gerlach, 2006 winner of Big XXL, surfed a wave of 68 feet in December 2006. Further south in the municipality are spots famous for their excellent windsurfing. The world-renowned Baja 1000 off-road race is held in Ensenada every year in late November, while the Baja 500 race is held in early June. Off-road enthusiasts use Ensenada year-round as a starting point to explore Baja California.

The gray whale's annual migration from Alaska to the lagoons of Baja California Sur between the months of December and March, and back in the months of April and May, can be seen from the coast of Ensenada. Sightseeing tours are available every day during migration season. The nearby town of Guadalupe, was founded by immigrant Russian Molokans in the late nineteenth century. Most of the Molokan community re-migrated towards California's Central Valley in the mid-twentieth century, and a Russian Museum commemorating their legacy in the region has been established. The traditional economic activities in Guadalupe are olive and wine production. Currently, about 90%of wine production in Mexico originates in the valleys of Guadalupe and adjacent Calafia. Many local wine producers offer tours and tastings. Every year during the month of August, the beginning of wine harvest season is celebrated in the Guadalupe Valley and in the city of Ensenada with a two week long series of cultural and culinary events, all under the title banner of Fiestas de la Vendimia (Wine Harvest Festival). This event attracts people from all over the world. The Ensenada Carnaval is one of the country's largest, as thousands of people gather in the streets for six days and nights. The Sierra San Pedro Martir mountain range and National Park is located within the municipality of Ensenada, about 240 km SE of the city of Ensenada.

There is a street in Ensenada called "la primera" (meaning the first in English). It's a classic tourism spot in Ensenada due to its many "Curios, Curiosidades" (trinquet and souvenir stores), restaurants, hotels, bars and popular clubs such as the Hussong's Cantina and Papas & Beer. There are plenty of things to buy and see as well as many places to go. La Primera is a very busy street, filled with tourists and locals. It is normal to go through a lot of traffic, especially at nighttime. La Primera is just one block away from Ventana al Mar (Window upon sea), a boardwalk/seawall avenue where an enormous Mexican flag is located. La bufadora or the blowhole, its the second biggest marine geyser in the world. It is located at the end of a long strip of shopping and markets.