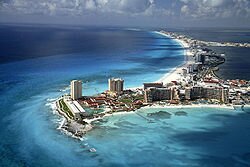 Cancun (pronounced as IPA: [kan'kun]) is a coastal city in Mexico's easternmost state, Quintana Roo, on the Yucatan Peninsula. Cancun is located on the Yucatan Channel that separates Mexico from the island of Cuba in the Greater Antilles. Cancun's region is sometimes known as the Mexican Caribbean . Cancun is the municipal seat of the Benito Juarez municipality and a world-renowned tourist resort. The city center is located on the mainland which connects over the Nichupte and Bojorquez lagoons to a narrow "7" shaped island where the modern beachfront hotels are located. The island of Isla Mujeres is a nearby island located off the coast and is accessible by boat from Puerto Juarez or Punta Sam. 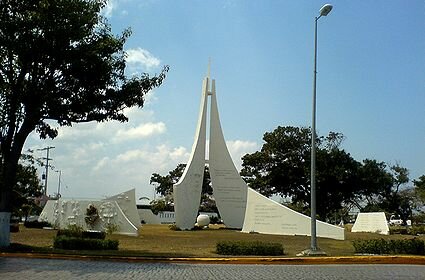 The older section of the city, known as "El Centro" follows the original master plan, consists of neighborhoods called "supermanzanas" (superblocks) that are formed by the intersections of the boulevards and traffic circles (roundabouts). This area is characterized by winding streets with cul-de-sacs that tend to keep out the main flow of traffic, including market places such Xel Ha. They usually have one or more parks, green spaces, paseos (pedestrian walkways) and various national historical monuments. Ave. Tulum is the main north-south artery (connecting downtown to the airport some 30 km (19 mi) to south). Tulum is bisected by Ave. Coba (pronounced Koh bah). East of Ave. Tulum, Coba becomes Ave. Kukulcan which serves as the primary road that runs through the long "7" shaped hotel zone. Ave. Tulum is terminated on the north side by Ave. Paseo Jose Lopez Portillo which connects to the main highway to Chichen Itza and Merida. Another major north-south road is Ave. Bonampak which runs roughly parallel to Ave. Tulum. The main ferry to Isla Mujeres is located off Bonampak. 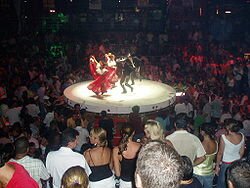 The original master plan was repeatedly modified, and on the mainland, often ignored. To save on the cost of installing sewage systems and other public services, the design of much of the rest of the city reverted to the grid plan after Hurricane Gilbert in 1988. The newest upper-middle-class residential areas reflect the original plan, but are much less intimate. Less expensive developments are comprised almost entirely of identical one- or two-story small row-houses, sometimes built around interior plazas. Almost all buildings on the mainland are below four stories high. There are about 150 hotels in Cancun with more than 24,000 rooms and 380 restaurants. Four million visitors arrive each year in an average of 190 flights daily. The Hotel Zone of Cancun is shaped like a 7 with bridges on each end connecting to the mainland. Hotels on the vertical or long side of the 7 tend to have rougher beaches and beach erosion can be a problem. Resorts on the horizontal or short end of the seven tend to have more gentle surf because the waves here are blocked by the island of Isla Mujeres which lies just off shore. The Hotel Zone offers a broad range of accommodations, ranging from relatively inexpensive motel-style facilities in the older section closest to the mainland, to high-priced luxury hotels in the later sections.

Many of the hotels are time-share condominiums with kitchen facilities. Some are all inclusive hotels which offer unlimited breakfast, lunch, dinner and snacks, beverages, both alcoholic and non-alcoholic, hotel activities, entertainment, non-motorized water sports, and 40% discounts on tours to the Mayan ruins. Tips and taxes are included in the price of the hotel rooms. There are also upscale private residences and lavish condominiums for rent that cater to the rich. Restaurants, bars and shops in the hotel zone tend to be rather expensive compared with the downtown area and other Mexican resorts. Travelers will find many well-known theme restaurants and clubs here. Although the Hotel Zone is frequently described as "posh" or "exclusive" the main Cancun tourism market is middle- and upper-middle-class, according to government statistics, which also report that more than 37% of Cancun visitors are Mexican.

On the opposite side of the island from the Caribbean Sea is the Nichupte Lagoon, which is used for boating excursions and jet-ski jungle tours.