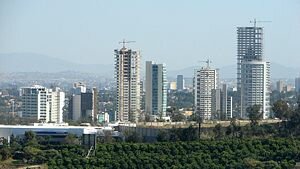 Attractions in the surroundings include ecological areas like the Primavera oak forest and spas, the Santiago River canyon located in the limits with Huentitan municipality, and the tequila maguey plantations distributed to the western outskirts of the urban area. In addition to tourists, many pilgrims visit Zapopan's Basilica. [1], [2]

The eastern half of the city is filled with large office buildings and some of the most important shopping malls in the state, including Plaza del Sol, Plaza Milenium and Centro Magno. Next to Plaza del Sol lies the construction site of a planned communications antenna/observation tower, the Torrena, a shopping mall and cultural center that has faced multiple delays in construction.