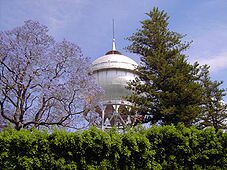 Celaya is a city and its surrounding municipality in the state of Guanajuato, Mexico, located in the southeast quadrant of the state. It is the third most populous city in the state, with a 2005 census population of 310,413. The municipality for which the city serves as municipal seat, had a population of 415,869. The city is located in the geographic center of the municipality, which has an areal extent of 553.18 km2 (213.58 sq mi) and includes many smaller outlying communities, the largest of which are San Miguel Octopan, Rincon de Tamayo and San Juan de la Vega.

An explosion in an improperly protected gunpowder and fireworks warehouse in September, 1999, killed over 60 people and badly injured over 300.

Celaya is also famous for the nvention and production of cajeta (milk candy).

The Celaya Airport has as of January 22, 2007 commercial flights to Santiago de Queretaro and there connecting to other destinations.