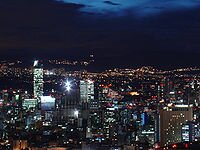 Mexico City (in Spanish: Ciudad de Mexico, D.F., Distrito Federal, Mexico or Mejico)[1] is the capital city of Mexico. It is the most important economic, industrial and cultural center in the country, and the most populous city with over 8,836,045 inhabitants in 2008.[2] Greater Mexico City (Zona Metropolitana del Valle de Mexico) incorporates 59 adjacent municipalities of Mexico State and 1 municipality of the state of Hidalgo, according to the most recent definition agreed upon by the federal and state governments.[3] In the last national census (2005) Greater Mexico City had a population of 19.2 million people, making it the largest metropolitan area in the western hemisphere and the third largest in the world by population. The estimated population for the Metropolitan Area is 19,826,918 as of 2008.[4] In 2005, it ranked the eighth in terms of GDP (PPP) among urban agglomerations in the world.[5] Aside from Sao Paulo it is the only Beta global city with 8 points in Latin America.

According to a study conducted by PricewaterhouseCoopers, Greater Mexico City (with a population of 19.2 million) had a GDP of $315 billion in 2005 (at purchasing power parity), ranking as the eighth-richest urban agglomeration in the world after the greater areas of Tokyo, New York, Los Angeles, Chicago, Paris, London and Osaka/Kobe, and the richest in Latin America; in 2020 it is expected to rank seventh with a $608 billion GDP, displacing Osaka/Kobe. 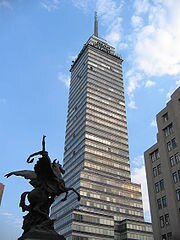 Mexico City is located in the Valley of Mexico, also called the Valley of Anahuac, a large valley in the high plateaus at the center of Mexico, at an altitude of 2,240 meters (7,349 ft). It was originally built by the Aztecs in 1325 on an island of Lake Texcoco. The city was almost completely destroyed in the siege of 1521, and was redesigned and rebuilt in the following years following the Spanish urban standards. In 1524 the municipality of Mexico City was established, known as Mexico Tenustitlan,[7] and as of 1585 it is officially known as ciudad de Mexico.[7]