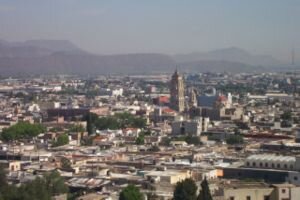 Saltillo is the capital city of the northeastern Mexican state of Coahuila and the municipal seat of the municipality of the same name. The city is located at 400km south of the U.S. state of Texas, and 90km west of Monterrey, Nuevo Leon.

As of the 2005 census, Saltillo had a population of 633,667 people, rising to 725,259 if the full Metropolitan Area is considered, making it the 20th biggest metro area in the country. The metro area comprises the municipalities of Saltillo, Ramos Arizpe, and Arteaga. The municipality of Saltillo had a population of 648,929. The Gross Domestic Product per capita in the Metropolitan Zone of Saltillo is one of the highest in Mexico with $13,936 USD. According to the ranking of the Inversionista magazine of 2006, Saltillo is the best city to live in Mexico, chosen from more than 53 Mexican cities.

Alameda Zaragoza is the largest park in the city and has an artificial lake in the shape of the Mexican Republic. The park is located just west of the downtown plaza.

The Colonial Center of the city is built in pink marble, giving Saltillo's architecture a distinctive flavour. Prominent buildings are the cathedral(built from 1745-1800), the Palacio de Gobierno (state government building), the Ateneo Fuente and the Instituto Tecnologico de Saltillo. The large cathedral is the best example of colonial religious architecture in northeastern Mexico; its facade is mainly Spanish Baroque, with less exuberant areas. The Centro Cultural Vito Alessio Robles (Vito Alessio Cultural Center) is an 18th Century repository of antiquities and documents from historians Vito Alessio Robles and Oscar Davila. The repository is also a temporal museum. The Casa Purcell (Purcell Mannor) is a Victorian style mansion built in the 19th Century by Irish merchant William Purcell. Today it is a cultural center.

The city has two world-class museums. The Museo de las Aves de Mexico (Bird Museum), featuring a collection of bird specimens from all over Mexico in realistic displays. The Museo del Desierto (Desert Museum) focuses on the geography, geology, paleontology (with dinosaur fossils) and biodiversity of the Chihuahuan desert, and the history and culture of the local people through time. It includes a cactus greenhouse and exhibits, with dozens of species.

The Mirador is an amazing place to observe a panaromic view of the city.