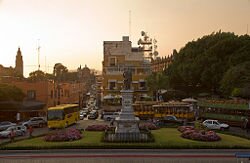 Cuernavaca (Classical Nahuatl: Cuauhnahuac IPA: [k?aw?.'na?.wak]) is the capital and largest city of the state of Morelos in Mexico. As of the 2005 census, the population of the city was 332,197; the municipality's entire population was 349,102 in an area of 151.2 km2 (58.4 sq mi) that includes numerous small localities outside the city, like Ocotepec, where interesting religious celebrations take place, like the Day of the Dead in the first days of November.

Cuernavaca is located about 85 km (53 mi) south of Mexico City on the M-95 freeway. It is known as "the city of eternal spring" because of its consistent 27°C (80°F) weather year round. Cuernavaca sits in the heart of central Mexico, and is surrounded by some of the most beautiful and culturally rich regions of the country.

The city's name comes from Nahuatl Cuauhnahuac "place near trees" (pronounced [k'na?wak]), the name of the pre-Columbian altepetl at the location. The name was altered to Cuernavaca by influence of the Spanish words cuerno "horn" and vaca "cow".