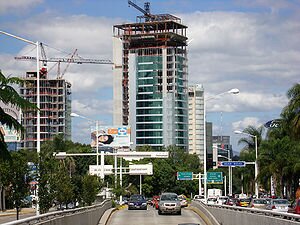 Guadalajara is the capital city of the Mexican state of Jalisco, and the seat of the municipality of Guadalajara. The city is located in the central region of the state and in the western-Pacific area of Mexico. With a population of 1,579,174 it is Mexico's second most populous municipality, as of 2008.[2] The Guadalajara Metropolitan Area includes seven other adjacent municipalities and has a population of 4,298,715 in 2008, making it the second most populous in the metropolitan area in Mexico, behind Mexico City.[2][3] The municipality is the most densely populated in Mexico after the Ciudad Nezahualcoyotl in the State of Mexico.[4] Guadalajara is situated at an altitude of 1,600 metres (5,200 ft), favouring it with a mild, spring-like climate. The city is named after the Spanish city of Guadalajara, whose name originates from its Arabic name Wadi-al-Hajara (meaning "Valley of Stones"; in theory the literal translation of the Iberian name (Arriaca), meaning "Stony River". Guadalajara is Mexico's second biggest city and a major contributor of economy,culture and religion and exerts significant influence to the rest of the country, the city also has the most important and ambitious projects of the country as far as infrastructure and business.

The city has hosted several international events such as the first Cumbre Iberoamericana in 1991, the Cumbre America Latina, El Caribe-Union Europea in 2004, the Encuentro Internacional de Promotores y Gestores Culturales in 2005 and will be the city host of the 2011 Panamerican Games, also was named the American Capital of Culture in 2005, Ciudad Educadora (Educator City) in 2006 and the first Smart City in Mexico due to the use of technology as a main factor of development.[5] The city is also known as Mexico's silicon valley due to its strong electronic industry[6] is also considered Mexico's high tech capital due to its country's leadership in software and informatics development.[6] According to FDi magazine, Guadalajara is ranked "city of the future" over all other major Mexican cities, has the second strongest economic potential of any major North American city behind Chicago, and was among the top five most business-friendly Latin American cities in 2007.[7]