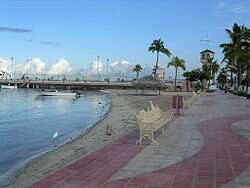 La Paz (Spanish for "The Peace") is the capital city of the Mexican state of Baja California Sur and an important regional commercial center. The city had a 2005 census population of 189,176 persons, but it can be considered that it roughly reaches 200,000 persons because of its surrounding towns like "el Centenario", "el Zacatal" and "San Pedro". Its surrounding municipality, which is the fourth-largest municipality in Mexico in geographical size, reported a population of 219,596 persons living on a land area of 20,275 km2 (7,828.2 sq mi).

La Paz was first id by neolithic hunter-gatherers at least 10,000 years ago who left traces of their existence in the form of rock paintings near the city and throughout the Baja peninsula. On May 3, 1535, Hernan Cortes arrived in the bay by La Paz and named it Santa Cruz; he attempted to start a colony but abandoned his efforts after several years due to logistical problems. In 1596 Sebastian Vizcaino arrived, giving the area its modern name, La Paz.

La Paz is featured in the John Steinbeck novel The Pearl (1947) and mentioned extensively in his travelogue The Log from the Sea of Cortez (1951). The city is also the setting of the children's novella The Black Pearl (1967) by Scott O'Dell, chosen as a Newbery Honor Book in 1968.