The city of Leon, formally Leon de los Aldama[2] is the fifth most populous city in Mexico and the first in the state of Guanajuato. It is also the seat of the municipality of Leon. It has a strong leather industry, offering shoes, boots, belts, jackets, and other leather accessories both to national and international markets.

The current Municipal Palace is of Ionic architectural style and occupies part of the site of the old "Colegio Grande del Seminario de los Padres Paulinos" (Grand Seminary College for Pauline Priests) who had to abandon the city in 1860.[7] 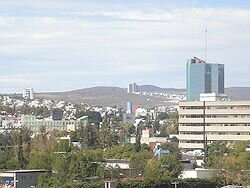 From 1861 to 1867 it was a military barracks. After the French Intervention, it was remodeled to conserve its original architecture by Coronel Octaviano Rosado to become the seat of government on 21 March 1869. The patio of the building contains a bronze statue of Benito Juarez to commemorate the centennial of his death in 1972. Since then, the building has had a number of additions such as the dome that now covers this patio, and a number of murals. These murals were painted in 1972 and 1973 by Jesus Gallardo covering the walls of the main stairwell and the hallway of the upper floor around the patio.[7]