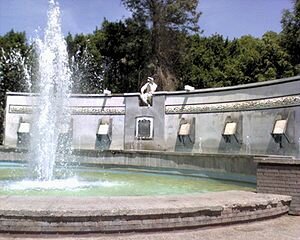 Torreon is a city and seat of the surrounding municipality of the same name is a city in the Mexican state of Coahuila. As of 2005, the city's population was 548,723 with 577,477 in the municipality. The metropolitan population, including Matamoros, Coahuila, and Gomez Palacio and Lerdo in adjacent Durango, was 1,110,000. It is the ninth-biggest metropolitan area in the country and is one of Mexico's most important economic and industrial centers. Torreon is served by Francisco Sarabia International Airport, a small airport with flights to several cities in Mexico and the United States.

Cristo de las Noas, at 21.80 m (71.5 ft), is the third highest work of this type in the Latin America, only smaller to the statue of Christ The Redeemer in Brazil and Cristo de la Concordia in Cochabamba, Bolivia. Situated on the top of a hill, this image of Jesus with extended arms symbolizes the Catholic faith and the iron will of the Torreonenses. The hilltop has a Catholic church and offers a view of the entire city.