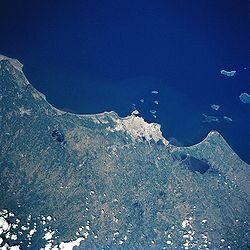 The city of Veracruz is a major port city and municipality on the Gulf of Mexico in the Mexican state of Veracruz. The metropolitan area is Mexico's First largest City on the Gulf coast (Tampico is consider second ) and an important port on Mexico's east coast. It is located 105 km (65 mi) along Federal Highway 140 from the state capital Xalapa, and is the state's most populous city, with a population of 444,438 in the city and 512,310 in the municipality, according to the 2005 census.[1] The municipality has an area of 241 km2 (93 sq mi) and includes such outlying communities as Valente Diaz and Las Amapolas. The metropolitan area, which includes the municipalities of Boca del Rio and Alvarado, had a total population of 702,394, compared to metro Tampico's total of 603,196.

It is often referred to as Puerto de Veracruz to distinguish it from the state. The people of Veracruz are known as Jarochos. It is also referred as the Four Times Heroic City after resisting various invasions, two from France (the Pastry War and the French intervention in Mexico) and two from the USA, (the Siege of Veracruz and the 1914 US occupation).