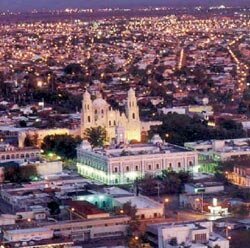 Hermosillo, formerly named Santisima Trinidad del Pitic (Holy Trinity of Pitic) is the largest city and capital of the Mexican state of Sonora, and is located in the center of the state, 167 miles from the border with the United States.

Centered on the Plaza Zaragoza, Hermosillo's origin traces back to 1700, when several villages were founded on lands previously inhabited by Native Americans. The official foundation of the city comes in 1741 by orders of the Viceroy of New Spain to create "El presidio de Pitic." In 1783 it came to be named the Villa de Pitic, but on September 5, 1828, it was renamed Hermosillo in honor of general Jose Maria Gonzalez de Hermosillo who in 1810 fought for the independence of Mexico in the state of Sinaloa. On April 26, 1879, the city was named the capital of Sonora, and that declaration was confirmed in article 28 of the state constitution, written on September 15, 1917.