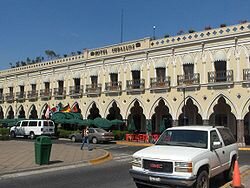 Colima is the name of a city and a state in Mexico. This article is about the city. For the state, see: state of Colima. There is also the Colima Volcano.

The city of Colima is the capital and main city of the Mexican state and municipality of the same name.

It is one of the oldest cities in Mexico.

Following the fall of Tenochtitlan in 1521, the Spanish conquistadors were quick to reach the west coast. Colima's native king (Spanish: Rey Coliman) organized the defense of his kingdom against the Spanish.

In 1523 the conquistador Gonzalo de Sandoval founded the first Villa de Colima in Caxitlan, near modern-day Tecoman. However, poor settlement conditions resulted in the founding of the Villa San Sebastian de Colima in what is now the city of Colima. The new location provided a better climate, lands better suited to cultivation, and proximity to mining.