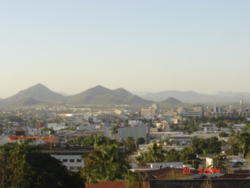 Culiacan is a city in northwestern Mexico, the largest city in the state of Sinaloa as well as its capital and capital of the municipality of Culiacan. With 605,304 inhabitants in the city (census of 2005), and 793,703 in the municipality, it is one of the largest cities in the country. The municipality includes such outlying communities as Costa Rica and El Dorado and has a total area of 4,758 km2 (1,837 sq mi). The city is located in a valley at the confluence of the Tamazula River and Humaya River, where the two meet to form the Culiacan River, and is located 55 m above sea level. It is located in the center of the state with almost equal distance to the other urban centers of the state: Los Mochis to the north, and Mazatlan to the south.