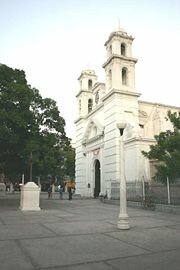 Among Iguala's main attractions are: the San Francisco Church, built in the 19th century and its surrounded by Tamarindo trees, and for that Iguala is also called "la Ciudad Tamarindera" (Tamarindo city) and the Lagoon of Tuxpan, characterized for its singular beauty. Iguala's local artisans manufacture gold and silver jewelry. General Vicente Guerrero was the first military leader to swear allegiance to the Mexican flag in Acatempan on March 12, 1821. The Plan de Iguala (published on February 24, 1821) ended the war of independence and was represented by a flag, called the flag of the three guarantees, which was made by Jose Magdaleno Ocampo. Thus the city of Iguala is called the birthplace of the modern Mexican flag. Each year a flag fair is held in Iguala. This fair is one of the most important festivities to the people of Iguala. It is celebrated with a float parade, cockfights, and handicraft exhibitions in late February.