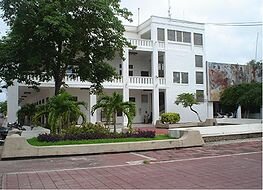 Chetumal (Chactemaal which means: "Place of the red wood" Modern Maya). It is the capital of the state of Quintana Roo and the municipal seat of the Municipality of Othon P. Blanco. In 2005 it had a population of 136,825 people.

The city is situated on the western side of Chetumal Bay, near the mouth of the Rio Hondo. Chetumal is an important port for the region and operates as Mexico's main trading gateway with the neighboring country of Belize. Goods are transported via a road connecting Chetumal with Belize City to the south, and also via coastal merchant ships. Because of its location on the Caribbean coastline, it is vulnerable to tropical cyclones; Hurricane Janet and Hurricane Dean, both Category 5 storms, made landfall near Chetumal in 1955 and 2007 respectively.

In Pre-Columbian times, a city called Chactemal (sometimes rendered as "Chetumal" in early European sources) was the capital of a Maya state of the same name that roughly controlled the southern quarter of modern Quintana Roo and the northeast portion of Belize. This original Chetumal is now believed to have been on the other side of the Rio Hondo, in modern Belize, not at the site of modern Chetumal.

During the Spanish conquest of Yucatan, the Maya state of Chetumal fought off several Spanish expeditions before finally being subjugated in the late 16th century.

The 1840s revolt of the indigenous Maya peoples against Mexican rule, known as the Caste War of Yucatan, drove all the Hispanic people from this region; many settled in British Honduras (modern Belize).

The current site of Chetumal was established as a Mexican port town in 1898, originally under the name Payo Obispo. The name was officially changed to Chetumal in 1936.

Two hurricanes in the 1940s leveled the entire town; Chetumal was devastated a third time in 1955 by Hurricane Janet. After this, the town was rebuilt with more solid construction, with concrete blocks replacing wood as the usual material.

The population of Chetumal was small (about 5,000 in 1950) until the construction of highways linking it to the rest of Mexico in the 1960s and 1970s; the city then boomed with substantial migration from other parts of Mexico.