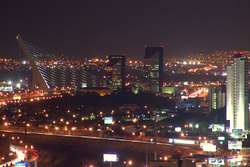 Monterrey IPA is the capital city of the northeastern Mexican state of Nuevo Leon and a municipality of the same name. Also known as "Sultana del Norte" (Northern Sultan), Monterrey is one of the three most important cities in all Mexico and a modern industrial and business center. The city proper has population of 1.1 million, and the metropolitan area of Monterrey has a population of 3.7 million (INEGI 2005). The city is named after the Countess of Monterrei (a city in Galicia, Spain) wife of the Viceroy of New Spain Gaspar de Zuniga y Acevedo, Count of Monterrey.