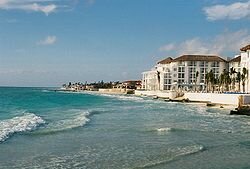 Playa del Carmen (Xaman Ha' or Plaaya in Modern Maya) is a city on the coast of the Caribbean Sea, in the northeast of the Mexican state of Quintana Roo, located at 20.62° North, 87.07° West. The city is the seat of the Solidaridad municipality. In the 2005 census, the city had a population of about 100,383 people and it is rapidly growing in population. It is the third largest city in Quintana Roo, after Cancun and Chetumal.

Originally a small fishing town, tourism to Playa del Carmen began with the passenger ferry service to Cozumel, an island across the Cozumel Channel and world famous scuba diving destination. While passing through, many people realized that it was a nice place to relax away from the crowds of Cancun but with the same quality beaches and turquoise waters. Perhaps just as impressive as Cozumel, Playa del Carmen's coast offers good scuba diving opportunities, as well as cenote diving for the more adventurous. 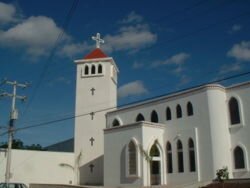 Today Playa del Carmen, or just "Playa" as it is colloquially referred to, is the center of the Riviera Maya concept, which runs from south of Cancun to Tulum and the Sian Ka'an biosphere reserve. Playa is a stop for several cruise ships which dock at the nearby Calica quarry docks, about six miles south of the city. A Mexican themed "eco-archaeological park", Xcaret (pronounced "esh-caret") is a popular tourist destination just south of the town. Tourist activity in Playa del Carmen centers on Quinta Avenida, or Fifth Avenue, stretching from calle 1 norte until calle 34, a pedestrian walkway located just one block inland from the beach which is lined with boutique hotels, shops, bars, and restaurants.

Elements within the Playa del Carmen local community and government have attempted to retain Playa del Carmen's reputation and charm as a small fishing village and artists' colony, without it becoming as large or tourist dependent as Cancun. To this end, the city passed an ordinance limiting buildings to three stories. A few four story buildings were built before the ordinance, however. Playa del Carmen is currently expanding north beyond the Colosio section and on the other side of highway 307, the Ejido. Playacar is a residential and tourist development in Playa del Carmen, just south of the main urban area, where most of the all-inclusive hotels, the aviary, and the golf course are located. Playacar is privately owned by the Castanon family.

There is a significant European influence in Playa, with a number of local business proprietors drawn from the European expatriate community.

In October 2005 Hurricane Wilma passed directly over Playa del Carmen, remaining in the vicinity for two days and causing significant damage and a temporary drop in tourist arrivals. Fortunately most of the damage was relatively superficial and repaired within a few weeks of the storm. Hurricane Wilma arrived from the Caribbean sea, passing over Cozumel before making landfall in Playa del Carmen. It then moved north along the Mexican coast, hitting Cancun especially hard.