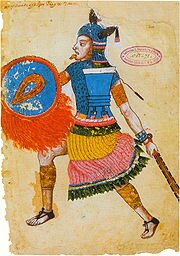 Nezahualcoyotl (meaning "Coyote in fast" or "Coyote who Fasts")[1](April 28, 1402 - June 4, 1472) was ruler (tlatoani) of the city-state of Texcoco in pre-Columbian Mexico. Unlike other high-profile Mexican figures from the century preceding the Spanish Conquest, Nezahualcoyotl was not a Mexica; his people were the Acolhua, another Nahuan people settled in the eastern part of the Valley of Mexico, settling on the eastern side of Lake Texcoco.

According to his descendants and biographers, Fernando de Alva Cortes Ixtlilxochitl and Juan Bautista de Pomar, who lived a century after Nezahualcoyotl, he was something of a monotheist, honoring his god in a 10-level pyramidal temple. The roof of this shrine was gem-encrusted and no human sacrifices were permitted, only the offering of flowers and incense. Some researchers, however, believe that Ixtlilxochitl and Pomar were attempting to cast Nezahualcoyotl in a light more favorable to the Spanish colonial authorities.