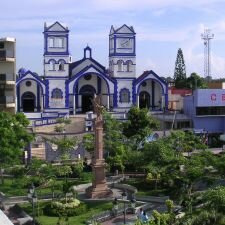 Much of the city sits on reclaimed marshlands, and many new homes built on this reclaimed land have a tendency to sink as much as several feet before settling. Much of the surrounding undeveloped land is marshy, especially toward the northeast en route to Coatzacoalcos.

It is a sister city of Minatitlan in the state of Colima, on the other side of the country.

One of Mexico's six oil-refining facilities is located there. The refining complex processes 291,000 barrels a day and produces diesel, fuel oil, and gasoline. The local economy basically depends on the petroleum industry, but corn, fruits, sugar, and rice are also cultivated in the area.

The artist Francisco Toledo was born in Minatitlan although birthplace is commonly wrongly attributed to Juchitan.